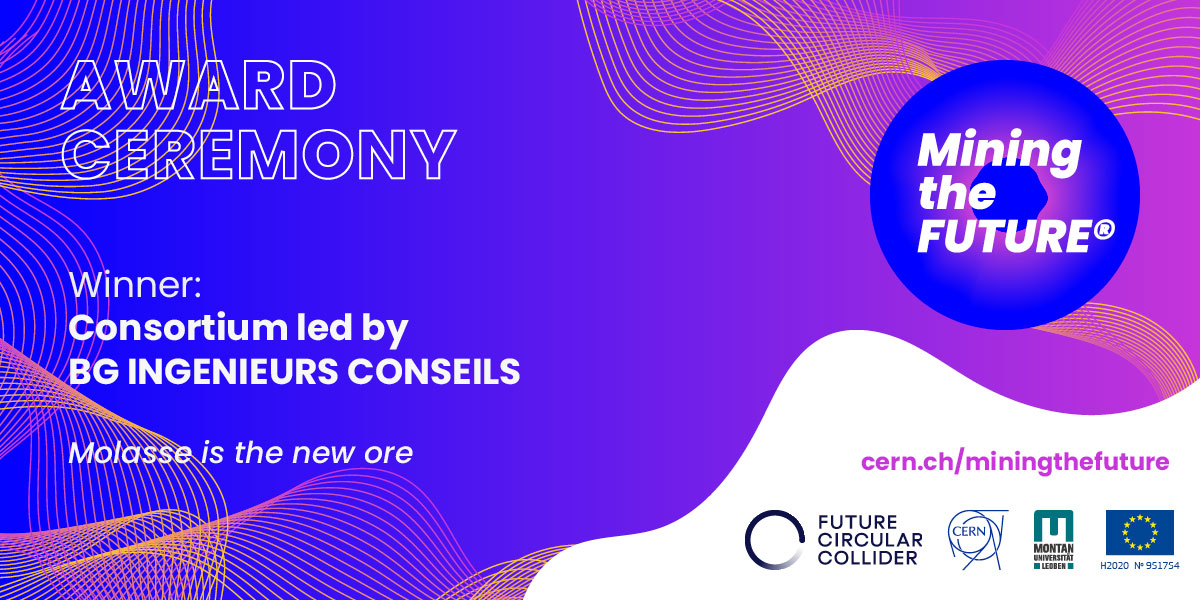 Fertile soil
to grow your idea

The Mining the Future competition sought sustainable solutions for the reuse of excavated molasse material. We called for applications that demonstrate innovative approaches and technologies to integrate this material into the future circular economy.

A Future Circular Collider to support the future circular economy

Experts from around the globe are working together in the Future Circular Collider Feasibility Study (FCCIS), which is committed to investigating the technical and financial viability of a potential future facility at CERN. The Study is supported by the EU-funded FCCIS project, and follows the recommendations of the 2020 update of the European Strategy for Particle Physics. A new generation of particle colliders would ensure a new and exciting era of exploration throughout the 21st Century.

The FCC study wants to couple scientific discovery with environmental sustainability. Building this collider and the infrastructure related to it would create about 9 million cubic metres of excavated materials, mainly molasse. The study does not want to treat this material as waste, but as a resource.

That is why the FCC collaboration, CERN and the University of Leoben, with the support of the EU-funded H2020 FCCIS project, launched the Mining the Future competition. This competition aimed to find sustainable reuse solutions for the excavated materials. The project should also serve as an example for future applications of molasse beyond this competition-specific project.

The final event of the international competition “Mining the Future” will take place on 27 September at CERN’s Globe for Science and Innovation! The four shortlisted proposals will be presented to the public and the winner(s) of the competition will be announced during the ceremony. The winner(s) will receive support of up to EUR 40 000 for further R&D efforts and business planning.

A Circular Collider at the heart of Europe

The European Organisation for Nuclear Research (CERN) is thinking long-term. Together with its international partners, CERN has started planning for an upgrade of its particle accelerator complex. One of the projects researching the next generation of particle accelerators is the Future Circular Collider project (FCC).

The FCC project envisages the construction of a new, 100 km long, quasi-circular particle collider. This collider and the associated research infrastructure would be located in the Geneva basin, straddling the France-Swiss border. It would be placed in a complex of tunnels, alcoves and caverns, between 200 and 300 meters underground.

This publicly funded research infrastructure project would be a European flagship project. It would increase cohesion between the participating countries and could serve a worldwide community of scientists until the end of the 21st century. It also aims at being an innovation factory in many domains.

The fast track to a circular economy

When densely compressed, fine-grained materials can be used to stabilise road- and railworks. This requires a lot of raw materials though, increasing the carbon footprint of mobility projects. Fortunately, molasse powder could be a more ecological alternative for reuse.

In western Switzerland, molasse has long been used to decorate houses. With 9 million cubic metres of excavated material, architectural applications could be extended to more and larger buildings. All the more so, because molasse is fire-resistant and sound-insulating.

As the right types of sand for concrete become increasingly scarce, construction companies are urgently looking for alternatives. The molasse that would be excavated could be reused aas a building m aterial for the next generations, even for the construction of the Future Circular Collider tunnel complex!

Molasse can have many other application.

Please note that the application process is now closed. The four shortlisted proposals will be presented to the public and the winner(s) will be announced at our special ceremony at CERN’s Globe for Science and Innovation on September 27.

We are pleased to invite you to The Award Ceremony of the Challenge-based international competition on 27 September at CERN's Globe for Science and Innovation in Meyrin, Switzerland.

Launched in June 2021 by CERN and the University of Leoben with the support of the EU-funded H2020 FCCIS project, the competition sought solutions for the sustainable use of molasse excavated material.

We received 12 solid proposals, which were reviewed by our panel of internationally recognised experts based on technological readiness, innovative potential and socio-economic impact. The four shortlisted proposals will be presented to the public and the winner(s) of the competition will be announced at a special ceremony at CERN. The winner(s) will receive support of up to EUR 40 000 for further R&D efforts and business planning.

The Mining the Future competition was open to all persons and organisations eligible to participate in Horizon 2020:

Applicants were asked to present a promising and credible solution for the reuse of excavated molasse materials. The proof-of-concept for the technology should already have been demonstrated in laboratory conditions (TRL3). The technology should credibly be on track to be turned into a product, service or industrial process by 2030 (TRL 9).

A full overview of the projects can be downloaded HERE

How are the winners selected?

An international jury panel of 10 experts from industry and academia is evaluating the proposals to select the most promising ones. The jury includes leading representatives from the fields of geology, subsurface engineering, materials science, innovation management and environmental management.

The jury will announce the selected proposal(s) in August 2022. The winner(s) of the competition will be announced at a special ceremony at CERN on September 27, 2022.

The winner(s) of the competition will receive support worth up to €40 000 for further R&D efforts and business planning.

Want to stay up to date with Mining the Future and the Future Circular Collider project?